This song is normally played as your single friends are huddled together on the dance floor before you turn your back and toss the bouquet to them. The one who catches it is meant to be the next one to marry. 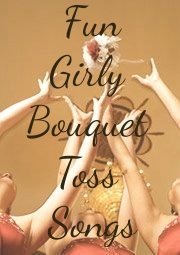 When considering which bouquet toss song to use, think of your girl friends and family members and all the fun times you have had together on girls nights out and before you and your groom became involved.

Pick a song that reminds you of these special times or a song about being a woman and about femininity.

The bouquet toss like the garter removal is a wedding tradition, but it is also your choice whether or not you want to include it in your celebration or not. You may also opt for a variation on this tradition.

If you want to read about some alternatives to this tradition in which you can still use a bouquet toss song, have a look towards the bottom of the page.

When to play the bouquet toss music?

Your music for the bouquet toss is normally played about 30 - 40 minutes after the first dance (if it is an evening wedding) or straight before you leave (if the wedding is planned to end early or it is a day wedding).

Make sure you warn your DJ and MC that you would like to toss the bouquet and the garter so that they can get ready and have the appropriate bouquet toss song cued.

All I Wanna Do - Sheryl Crow

American Woman - The Guess Who

The Chapel Of Love - Dixie Cups

Girls Night Out - The Judds

Hit Me With Your Best Shot - Pat Benatar

One Way Or Another - Blondie

Single Ladies (Put A Ring On It) - Beyonce

Sisters Are Doin' It For Themselves - Eurythmics

This Ones For The Girls - Martina McBride

What A Girl Wants - Christina Aguilera

So Many Men, So Little Time - Miquel Brown

If for some reason you want to break from tradition and do something different for your bouquet toss then try some of the following suggestions:

1. Call all girls to the dance floor and not just the married ones. Start the bouquet toss song in the background to create some atmosphere. Have your MC or DJ ask them all to make a silent wish before you toss the bouquet. The one who catches it will not only get a nice bunch of flowers, but will have her wish come true also.

3. Instead of doing a bouquet toss you could have all the single girls gathered on the dance floor. Play your selected bouquet toss song and have them dance to it. Have them pass along a salt shaker (or similar item). When the music stops, the one holding the salt shaker gets to keep the bouquet. You can do the same with the pepper shaker and the Garter Toss.

4. Substitute the traditional money dance with an auction for the bouquet. This is great for some honeymoon spending money. If you don't need any extra money, then donate it to your favorite charity or give the venue's staff a great big tip!

5. Have an anniversary dance. Your DJ can call all the married couples to the floor and can play a nice love song instead of a bouquet toss song. He can then after 30 seconds of dancing ask all the couples married less than a year to leave the dance floor, after another 30 seconds ask the ones married less than 5 years to leave. In the end the couple who have been married the longest will be left dancing. Present them with your bouquet.

6. For just a little added fun, choose Jump by Girls Aloud as your bouquet toss song. Tell your girls to wait for the chorus and when the song goes "jump for my love" toss the bouquet as they jump in unison with the song. It is a nice upbeat version of the Pointer Sisters hit and will not break the dance vibe too much.

7. If you don't want your single lady guests to jump for the bouquet, how about gathering them around and instead of tossing the bouquet, taking it apart and giving each one of them a flower from it? You can have the lucky guy who catches the garter dance with all of the single girls!

8. To get the party started again, ask the guy who caught the garter and the girl who caught the bouquet to open the dance floor again. You don't have to use a soppy love song for this. A nice mid tempo song will do fine. Try something like My Baby Just Cares For Me by Nina Simone, Brown Eyed Girl by Van Morrison, or even You Never Can Tell by Chuck Berry from the move Pulp Fiction. If your guests know it, it can be quite a lot of fun! See the clip below: