Your wedding recessional music will play as you walk back down the isle usually after the kiss or the announcement. There are some occasions where your guests will exit first while you sign the register inside the church, and therefore you will have no formal recessional.

They will then be handed some confetti outside the church and will shower you as you exit. You can then play your choice of wedding recessional song.

Whichever way you decide to do it (will depend on how much you stick to tradition), your wedding recessional music should be festive, joyous and upbeat. The formality of the big day is now over and you are man and wife! Your choice of recessional song should reflect the way you feel at that moment. 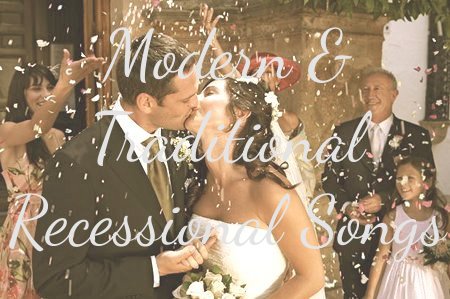 Don't hesitate to choose a non-traditional classical piece or a contemporary wedding recessional song even if the rest of your wedding has been traditional. This moment marks the end of the ceremony and the start of your life together as husband and wife. As always, just check with your officiant that the song you have chosen is allowed.

The song you choose for your wedding recessional is normally played all the way through and is not faded. You can even choose more than one song to be played one after the other to continue the celebratory mood into your postlude (the music played right after the recessional until your guests leave for the reception)

Below is a list of wedding recessional music to enhance this joyous moment. You can click on the links to listen to the songs and then download them.

The songs below are traditional, classical wedding recessional songs:

The following songs are instrumentals (mostly soundtracks from movies) as well as non-traditional, but appropriate songs for your walk back down the aisle:

Arrival of the Queen of Sheba - Handel

Autumn (From The Four Seasons) - Vivaldi

Spring (From The Four Seasons) - Vivaldi

The following songs are non traditional and include selections from various genres like Rock, Country, R&B, Vocal, Folk and Pop. Take a listen to them in the widget below:

Walking On Sunshine - Katrina and the Waves

Can't get enough of your love, Babe - Barry White

I Cross My Heart - George Strait

This Will Be (An Everlasting Love) - Natalie Cole

All You Need is Love - Beatles

Can't Take My Eyes Off You - Andy Williams

I'm A Believer - The Monkees or Smashmouth

My First, My Last, My Everything - Barry White

Forever and Ever, Amen - Randy Travis

I Got You (I Feel Good) - James Brown

It Had To Be You - Harry Connick Jr. or The Wedding Singers

I Believe In A Thing Called Love - The Darkness

Cowboy Take Me Away - Dixie Chicks

I Only Wanna Be With You - Dusty Springfield

Fly Me To The Moon - Frank Sinatra

You're The One That I Want - Olivia Newton-John

Another One Bites The Dust - Queen

Love Will Keep Us Together - Captain & Tennille

Island In the Sun - Weezer

If none of the songs above quite do it for you and you are still at a loss, try one of the following pages:

Plan the rest of your ceremony music:

Now that you have chosen the perfect confetti music, choose the rest of your wedding ceremony songs: 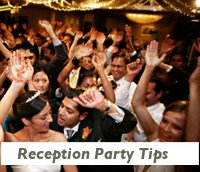 Do you need some Wedding Reception Party Tips? You want your guests to have a great time don't you? You want them to dance and to remember your wedding night not only for the romance, but also for the incredible amount of fun they had. Click Here for a few helpful hints and tips to ensure your wedding reception party is the success you have always hoped it would be.